Rats lived 90% longer on C60 olive oil and none of them developed the usual old-age tumors. C60 molecules bonded to olive oil molecules were also shown to fully protect rat livers against normally lethal levels of free radical damage in the livers of rats. The proper name of this interesting molecular C60-olive-oil merger is Lipofullerene C60 (C60 is in fact called "Buckminsterfullerene") but most sellers call it "Carbon 60 oil". Most sadly do not use Olive oil, though.
Buy our Carbon 60 Olive Oil 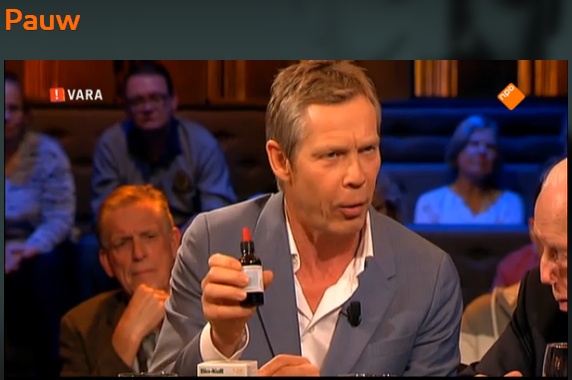 Our C60 oil on the Netherlands' most popular talk show. We did not pay for that!

Anti-aging author Pim Christiaans shows our product on the Netherland's top talkshow and says that C60 in olive oil is currently the world's #1 most promising anti-aging product. Before we were notified of this fragment, we never heard of Dr. Christiaans. We do not work with resellers and we did not pay him to endorse our product (he does not mention our company or brand). The fragment can be seen here. 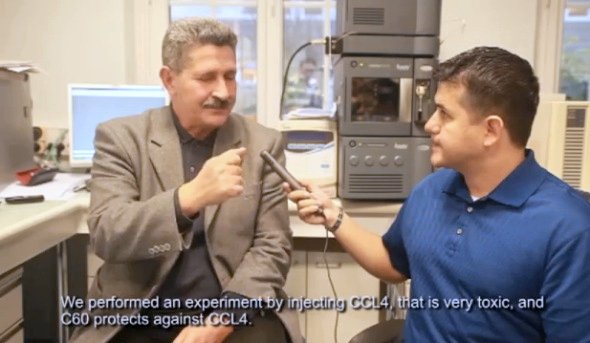 YouTube interview with the principal scientist of the C60-oil rat study:

Professor Moussa, leader of the study team says in the interview that C60 (Buckminsterfullerene) is totally non-toxic. He has been researching Fullerene C60 for 18 years. Perhaps the most interesting part of the interview is that the research team killed the last surviving rat after 5.5 years because they were eager to conclude the experiment and publish its incredible results. So that rat did not die of natural causes and could have lived even longer. The Wistar rat used in the study normally lives only 2 to 3 years.

This site has articles on all aspects of this exciting new product. We found animal studies that documented brain rejuvenation in mice and the near-doubling of lifespan (PDF) and the prevention of cancer and the diseases of old age in rats. We also found toxicological studies that show that C60 (Buckminsterfullerene) in olive oil is safe. C60 in olive oil also has an extremely effective liver-protective effect, as documented in the same publication, where rats were poisoned to death with liver-destroying chemicals but the rats that took C60 barely were affected at all. Prof. Moussa mentions this in the interview:

"The rats that took C60 did not develop any tumors, unlike the rats in the control group."

The scientific article this product is based on can be downloaded on the left sidebar of this site and in it you can see the autopsy results of the rat livers that were poisoned with a very toxic chemical. The rats that did not receive C60 beforehand quickly died and their livers look very pale and damaged. The C60-rats barely were affected and an autopsy showed healthy-looking livers.

The C60-in-oil articles on this site are grouped per topic, available on the blue navigation bar. If you are interested in living longer in good health, you should read these articles and make up your own mind about this product.

Special-interest publications online have picked up on this major discovery in life extension science:

At the time of publication of the scientific publiction, many mainstream newspapers reported on this extraordinary breakthrough, however they all appeared to have pulled their articles because there is not a single trace to be found anywhere online anymore, not even using Google news. Zero search results for buckminsterfullerene lifespan in Google News, for example.

In addition to this strange scrubbing of news articles, there seems to be a concerted effort underway to spread disinformation on those articles that remain in the "really free press" (not owned by large multinational media conglomerates). Blatant disinformation is posted such as: "The longevity effect was mainly due to the olive oil, there was not much added benefit of the buckyballs" - blatantly untrue, since the C60-rats lived a full two years longer than the EVOO (extra virgin olive oil) control group. Note that the average rat only gets a couple of years old! There are also commenters who falsely claim that the extended lifespan was "theoretical only", "based on extrapolation/estimation". The opposite is the case: The rats were monitored until they died of natural causes. They lived 90% longer than rats on a normal diet. 5.5 years old, breaking the record for Wistar rats by an incredible margin. None of the rats died of the usual tumors or pneumonia - they all died of the generalized effects of old age. They aged twice as slow as normal and none of them died of any disease. Interestingly, the C60 preserved the extra virgin oilive oil very effectively: After six years, when the experiment had been concluded after all rats had died, the oil still had not turned rancid. 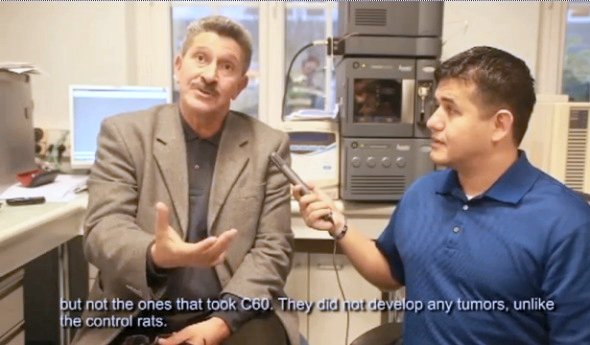 Dr. Moussa has no commerical interest in C60 and holds no C60 patents or C60-related shares.

No tumors in old age, reversal of brain aging

Conclusion: Carbon 60 in extra virgin olive oil is perhaps the most effective anti-aging and cancer-prevention agent imaginable. The brains of elderly mice rejuvenated to the level of young mice in a separate study. The C60-oil rats reached their maximum genetically determined lifespan (Hayflick limit). None of the rats died of the typical tumors they get in old age or, another common cause of death, pneumonia due to a weakened immune system. This news seems to be deliberately suppressed by the corporate media and there appears that there is an effort underway to discredit the published rat study and spread disinformation about its findings. A world where people don't get cancer is a very scary world for Big Pharma. 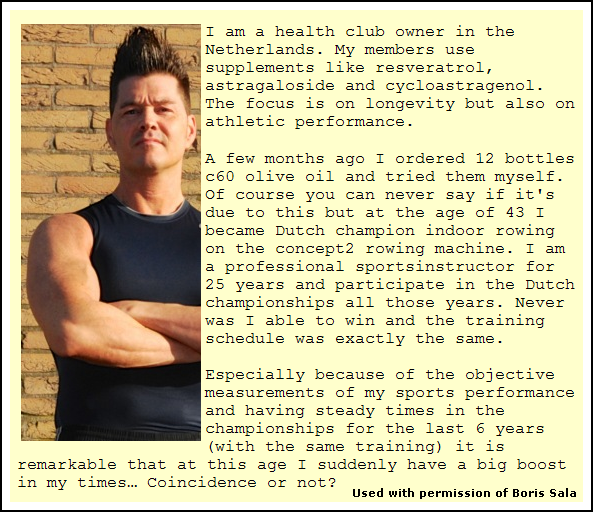 Who is taking this and what do they report?

Since the news of the scientific experiment broke, a group of "early adopters" started to manufacture their own C60 in olive oil. Some invested in expensive equipment or had access to a lab and followed the original experiment to the letter, others cut corners. More than a thousand bottles have been sold by us in that phase as well. Initially, on Longecity.org was a huge thread with the experiences of those intrepid first-timers, but that thread has been removed, apparently because nearly everyone who took it reported immediate, long-lasting beneficial effects of the C60 in oil. The moderators then removed the thread, deleted the positive mentions of dozens of first-time-users and announced that they had split the thread into a scientific discussion on C60 only and a discussion on how to manufacture the product at home only, and that any mention of positive effects of C60 in extra virgin olive oil was explicitly forbidden and would be censored. You can verify this announced policy in these threads:

The above threads are by far the most important threads discussing C60 online and the censorship is fortunately limited to the deletion of the mention of positive side effects.

Previously, on the deleted thread, the majority of experimenters reported these beneficial effects:

Some of these reported effects may of course be due to the Placebo effect, on the other hand any longevity- or cancer-protective effects would not necessarily have to be accompanied by any noticeable physiological phenomena.

The current situation is:

- Mainstream media ignored the discovery or made a cursory mention that they later unceremoniously removed from their sites.

- Longevity and anti-aging forums had people taking this product but as soon as they started to report beneficial effects their posts were censored. To be honest, we do not think most people will notice (m)any noticeable effects when taking this product. We think that it may help prevent cancer and add some healthy years to a human's life, but there is no way to be sure, and we will likely not find out this century. The results in higher mammals such as rodents are extremely encouraging however. Athletes (people who push themselves to their limits in sports requiring endurance, strength, stamina) do report very significant effects, but ordinary people do not seem to notice anything remarkable (except what we think is the Placebo effect).