Wasn't the c60 rat study done with too few rats?

Q: How serious should we take the rat study, they only used six rats, right?

A: They used 18 rats. Six of those received the C60-olive oil mixture, and only those rats lived very much longer than the rats in the both control groups. If six rats would have been too little to judge the effects of chronic C60 toxicity, the study would have used more rats, because otherwise they'd have to repeat a multi-year study. The number of animals required for a longevity study would be similar as for a chronic toxicity study. The study concludes:

"Thus, based on previous investigations [44], C60 should be the most efficient ever material for extending lifespan."

"Our results show that while olive oil treatment can lead to an increase of 18% of lifespan of treated rats, C60-olive oil can increase it up to 90%, as compared to controls."

Below is the survival graph from the study. We indicated the approximate median lifespan (months) of the rats in green: 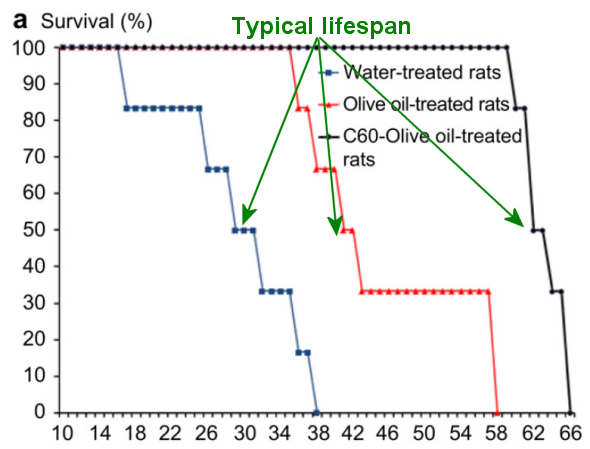 The study concludes with a statistical calculation on how significant their findings are, based on a 18-rat study:

" C60-olive oil extends the lifespan of C60-treated rats with a probability of 0.999 and 0.995 with respect to water and olive oil treatments, respectively."

So they say that the likelihood that the C60 in the olive oil does not extend life is a mere 0.5%, The odds of life extension are 199 to 200, based on the sample size and findings of the study. These figures are highly significant, and thus we can with great certainty assume that C60 in olive oil indeed significantly extends life, even with just six rats living longer. This is mainly because all of them lived longer, and all of them lived much longer than the rats in the control groups. If you look at the graph, then you can see that the C60 rats lived typically about twice as long as the rats in the first control group, and about 55% longer than the rats in the second control group. That can't be a coincidence, as the rats were all genetically identical, fed the same way, housed the same way and of the same age. Still in doubt? Consider the fact that rats normally can't get that old at all! These lifespans have always considered to be unattainable for rats, under the most favorable of circumstances.

Hi i was just wondering that the product you selling is based on one study on 18 rats. That only 6 of them were treated with c60 olive oil. Why nobody repeat this study. It feel's like you selling your product based on study of 6 rats. This is too little. Thanks

Well, we explain in the article why this is not "too little" because statistically, it's near-impossible that this happened by chance. It's like six people all living to 155 years old afer being given the same pill. It would most likely be the pill that made them break all records, and not a miracle of some sort.

It's not true that noone is replicating this study. In fact, we paid (sponsorship) to have this study replicated by a team of Longecity members. Each member will replicate the study, some people will use more rats.

And of course the "mainstream" scientific community will not rest on their laurels either and will follow suit. The fact is, since the rats live to nearly six years of age, replicating the study takes six years. That means we'll have to wait five more years to hear of the results. If a study "fails", it will take approx. two more years to hear of any results.

Why are we already selling this product, in spite of only one rat study?

Because as we explained in this article, it is near-impossible that this study was faked (its lead author is a long-standing fullerene expert and a respected professor in France, he has no patent on C60-in-oil and he has no commercial interest in this unexpected result of his toxicity study) or that its results can be dismissed as a statistical anomaly. So we firmly believe that this product increases the lifespan of mammals. We wanted to take this product ourselves, so we had to produce it anyway. Since it fits our "health and beauty" philosophy perfectly, we are selling it to whomever wants to try it on their pet rats, other animals or themselves. That's why we call ourselves "owndoc", in the sense of "being your own doc". This product is extremely safe and totally non-toxic, so anyone wanting to try should be permitted to see whether their pets will live much longer, to give but an example. Because by the time other trials have confirmed this trial, those pets will be long dead, in case of rats.

Another reason we think this product really does prolong lifespan is the plethora of miscellaneous studies having been done on other lifeforms. Every study so far shows a lifespan increase. From fungi to plankton to mice to rats.

thanks for your answer. I'm taking c60 myself it is a great antioxidant but the question for you is, can you overdose? or put your health at risk by taking more than one pipplet? Thanks

Non-toxic means exactly that, non-toxic. I know of people who have replaced a third or half of their caloric intake with this product for weeks. You can verify this on Longecity.org.

Some people have consumed more than a liter a month. One person on Longecity says he drunk many liters in a relatively short time (he was a producer/seller of this product). We also have taken very high doses initially. There should be absolutely no noticeable effects at any dose. We believe that any effects, positive as well as negative, are due to coincidences or the Placebo-effect.

The only thing this product can reasonably expected to do is to protect against the formation of tumors and to extend life. If you are sick, it is not going to improve your condition one iota. It's a product for people who are in it for the long haul, people who want to live a long and healthy life.

It would be really crazy if something this simple were the solution to doubling the human lifespan, much less treating any kind of diseases (if that turned out to be a side benefit). Ichor is studying cancer treatments with this stuff on rats right now. The downside of positive outcomes is waiting on replication which can take years. It's a gamble against time with money, which we all have so little of both.

Also the problem with this is that humans outlive rats by more than 72+ years on average so this presents a problem when you're taking this stuff as far as what to expect. I took fish oil for years and didn't expect to fly or anything, but I assumed I was getting some benefit by taking it. Turns out it was all based on one study that's all being called into question. Let's say this all turns out to work. Should I expect to feel better from taking this or would it just be an under the radar thing that a person might not notice without simply living out the extended lifespan? Would I grow younger looking for a while? Is anyone reporting that? It's all anecdotal and could all be placebo.

There is no way that this product will double human lifespan. I think that humans, based on the rat study, could at most expect to live 15 years longer, and could possibly expect not to get cancer during their lifetime.

You should not feel any different when taking it, of course. Not getting cancer is not something you can "feel". Living longer is very different than "getting younger". You won't get younger. You'll get older slower.