Our C60-in-EVOO antiaging product (Fullerene Carbon 60 in extra virgin olive oil) uses Buckminsterfullerene from SES Research in the US or from Solaris Chem in Canada. Both manufacturers' C60 passed our quality tests with flying colors. Since we are the largest producer of this product, we have been looking for a cheaper supplier of pure Buckminsterfullerene and we thought we had found one in Russia: NeoTechProduct, run by Georgy Vilkov and Igor Danilyuk. These scammers used to call themselves HTICO, before they were exposed by us.

SES charged $4000 for 100 grams of 99.9% pure C60, whereas NeoTechProduct wanted only €2000. After having validated NeoTechProduct's 5 gram sample, we ordered 100 grams from them, and that was when the problems started. NeoTechProduct and Mr. Georgy Vilkov clearly never had done business outside of Russia, or even any business at all, which could be inferred from their invoice number 1. That "invoice" was worded like a contract, using a Russian contract template, bearing official looking stamps and signatures of NeoTechProduct's director, etc. We would eventually receive eight identical signed and stamped copies of this invoice/contract, but not after severe delays, as for some reason, Russian Customs refused to let the shipment out of the country because of omissions in the paperwork. Five weeks after payment, we finally received our small shipment and started the Carbon-60 in olive oil production process.

However after several days of stirring, the characteristic ruby red color of Buckminsterfullerene in oil still hadn't been attained. Instead there was a dirty brown color with lots of undissolved residue and nothing we did could change that. Not stirring harder, not even at high temperatures did their C60 dissolve properly, which we tried as a final test before sending the curious substance to be analyzed chromatographically.

The result: 12.5% of what NeoTechProduct sent us was C60, the rest was "undissolvable carbon compounds". We had been scammed.

When we told Mr. Vilkov about the problem he was extremely reluctant to do anything about it, he was downright hostile and threatened with "causing a scandal that will take down your company". He said that due to how Russian banks and Russian financial regulations work, they would be unable to refund us, neither did he have much faith in our chromatography results, etc.

So NeoTechProduct refused to believe us until we sent them a sample of their own product back by courier. After many weeks had passed, they eventually replied:

"A few days ago we finally received from our logistics service the sample that you sent us. Today we made first test and got and upset result, we accept that that product is defective. The solubility of it is very poor. We're now making an investigation on how that situation may been allowed. We bring our apology and in the few days please await an official letter from us with explanation. "

We didn't just lose 2000 Euro, we also lost 45 litres of premium quality extra virgin olive oil and of course we lost a significant part of our startup production capacity and the resulting loss of income from that.

Then Georgy Vilkov accused another Russian company called ILIP Corporation, run by Alexey Leonidovich Nagoryansky. The person who signed off on our order calls himself Egor Evgenievich Makeev. Both people seem not to exist in reality.

ILIP confirmed to us that they were indeed NeoTechProduct's supplier, but they said that it must be us who were not dissolving their wonderfully pure C60 properly. When we informed both NeoTechProduct and ILIP that we had let SES - world #1 experts in fullerenes test their stuff and that it was basically chimney soot with a little C60 mixed in, there were many apologies issued by NeoTechProduct's Georgy Vilkov, followed by the promise of sending us 130 grams of really pure C60 this time. Initially, we went ahead with that proposal but it soon became clear that neither NeoTechProduct nor ILIP could deliver on that promise. They "needed more time" and they "did not like our tone".

We told them that instead of doing further business with them, we preferred to expose them as scammers, for the benefit of other companies considering to manufacture a similar product as ours. It will ultimately benefit the end consumer as well. Steer clear from Russian fullerenes and especially from NeoTechProduct.

The criminal who runs the company at the moment is calls himself Sergey A. Ponedelchenko. There is no evidence that this person really exists.
Below is SES's test result of the fake C60 we received from NeoTechProduct: 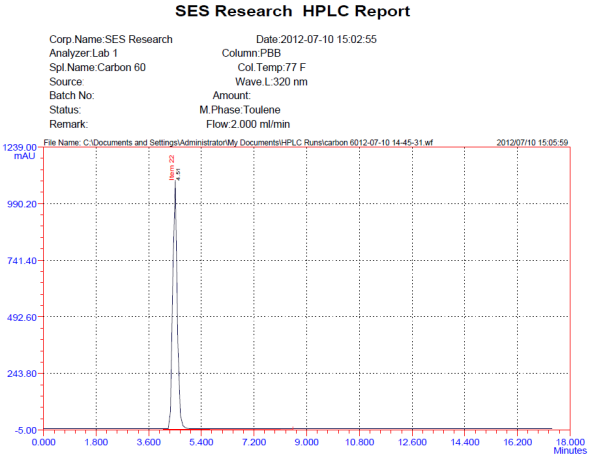 Of course we have all original documents, impure C60 product, SES test results and emails available in the unlikely case NeoTechProduct would want to sue us for defamation. In our opinion, the company is a criminal organization sells fake fullerene products. The extremely hostile tone and repeated threats in their communications show that they are not a professional company.

Our emails to all of their published email addresses bounce, and after doing some investigations, we conclude that there none of the people claimed to work for the company really exists under those names they specify. Telephone calls are taken by a Russian-speaking answering machine only. These companies have largely empty shells of websites.