The color of the Carbon-60 in olive oil

It is extremely hard to photograph the deep ruby red color of the Buckminsterfullerene C60 dissolved in olive oil, because the oil is much too dark to look red on a photograph.

We put a lamp behind an Erlenmeyer that had been mixing C60 for a week: 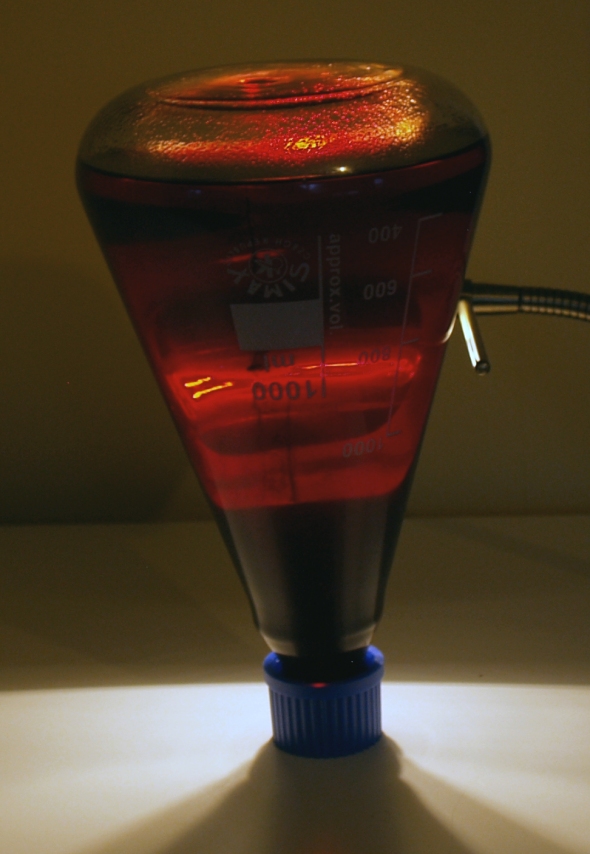 But it doesn't do the color justice, as we had to brighten the picture in order to see anything at all, as the photo became very dark because we put a lamp shining at the camera. The red colors found online are of C60 dissolved in water, it's much harder to show it in oil. The real color of the wall in the above picture is yellow, we just were not able to get the lighting conditions such that the color would show up. In reality, the oil is a very dark deep ruby red. The light behind it is a halogen lamp.

When you take a smaller, centrifuged and filtered amount, the color looks brown: 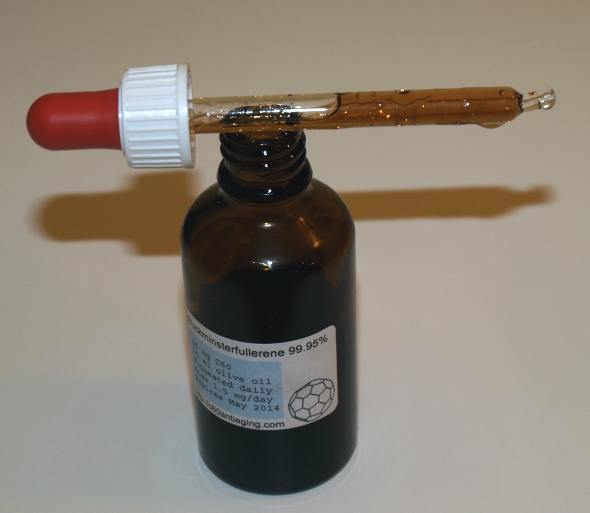 There are several C60-in-olive-oil pioneers on the Longecity forum who are mixing their own Buckyballs into oil and they had the same experience. As soon as you take a small quantity of the oil, it looks brown.

This is the same oil after one week of mixing (still with plenty of suspended C60 particles so it's more brown than red.)

This is the color after two weeks of stirring and the centrifuge stage (we filled off a small centrifuge tube so that the color became visible in front of a lamp): 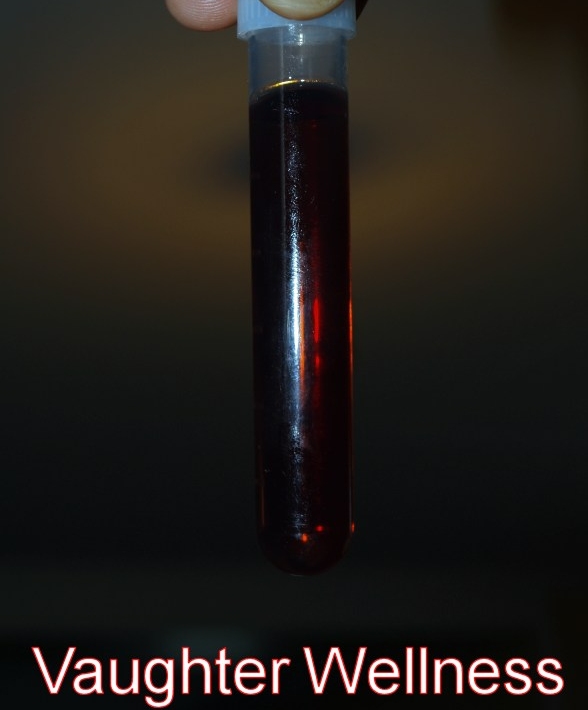 Why are some c60's purple and some red? I made my own and it came out red but I am left bewildered as to why red. I used Extra Virgin Olive Oil as the carrier. Any info will be of help!
Thank you!

Depends on the color of the oil, mostly. Chlorophyll is green and oils contain various amounts of it. Red + green = some other shade... It also depends on the spectral properties of the light you're using. A light bulb produces a rather flat spectrum, but light bulbs are illegal in Europe, for ex. so we use LED lighting or Fluorescent lighting and their spectra have peaks at certain color ranges. It also depends on the concentration of the C60 and VERY much on exactly how much C60 you're observing (through how many mm of it are you shining light through). Then there are the refracting properties of the glass it's in, combined with the angle of the light, any (blue light) filter you may have on any glasses/contact lenses you're using, and even deviations of the normal of the cones in the eye...

I don't think anyone ever defined how "dissolved C60 in olive oil" should look like, color-shade-wise, since the only way to do that would be to put it in a standardized container, lighted by a standardized light source and measuring the spectrum... The only machine able to do this costs a 5-figure amount...